The mix of Twi and English clearly exhibits his Ghanaian style. His video for Overdose featuring Jesse Jagz on his latest Highest album expresses Africanism.

There’s a reason why Sarkodie is undoubtedly the best at what he does. His consistency over the years has kept him at the top. His drive to give his fans more than what they expect has brought him where he is today. And it’s that same drive that keeps him moving forward. One thing Sarkodie never fails to incorporate in his songs are a representation of his culture.
The mix of Twi and English clearly exhibits his Ghanaian style. His video for Overdose featuring Jesse Jagz on his latest Highest album expresses Africanism.
The video showcases various outfits styled with African print fabric. Even the outfits with modern western styles have an African touch to it as well. Face-painted designs, jewellery of unique elegance and gold & silver brought out the boldness in the models who were a representation of the vibrancy of African culture.
The deserts and zebra, the tall trees and vast grasslands, illustrated in the video, are spectacles of most African countries on the continent.
The promotion of Pan-Africanism by great leaders like Kwame Nkrumah was a feature in this video which made the Overdose video one of a kind. Credit to Sarkodie for his originality and promotion of Ghana and Africa.

-Write up by Otema Yirenkyi

Rising Star ‘Kobla Jnr’ features Efya in ‘Only You’ 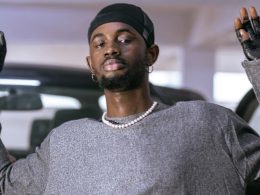 VGMA19: DopeNation goes head to head with Sarkodie, Stonebwoy, & more for HipLife Song Of The Year

The Vodafone Ghana Music Awards Festival Is Back again. This year’s edition promises to be better and more exciting as…
byCurated
Read More

Samini calls for unity among Ghanaian musicians ahead of #VGMA20 big day on Saturday, May 18th