UK based Ghanaian Gospel songstress Diana Hamilton launched her latest album ‘iBelieve’ at her ‘Experience with Diana Hamilton’ concert at the ultra-modern City Gates auditorium in London on Saturday the 29th of September 2018, and it was a night that lived up to all expectations.

The event had been talked about for weeks across various social media networks, but the reality of the evening exceeded the hype. All indications were that the Diana Hamilton team had meticulously prepared for the evening with military precision and delivered what had been promised.

Diana Hamilton fans travelled from far afield as Leeds, Milton Keynes, Newcastle, Belgium and USA to support the Artiste and were not disappointed.

Like a flight that had been delayed due to a technical hitch, the slight technical delay was easily forgiven by the audiences the moment the DH band struck their first chord.

The band (under the directorship of Stephen Asamoah-Duah of the “Compozers” Band) supported the DH worship team who lead the audiences in a time of intimate worship with various members of the team taking turns to lead.

This was followed by Charlotte Appiah who took things to a crescendo with a medley of local praise songs which got the crowd singing and dancing. Niiella then infused the spiritual atmosphere with an eclectic selection of worship songs with her impeccable vocals.

Diana arrived on stage and sent the crowd into a frenzy, belting out a selection of her old hits and music from her brand new ‘iBelieve’ album, including ‘Mo Ne Yo’ which is currently number 3 on the AstepFwd UK Gospel charts (the video to the song currently has about 1.3 million views on YouTube since its release 8 weeks ago).

The night was interrupted for a few minutes to allow Diana to launch the album with various invited pastors praying over the album, and for a video presentation of the activities of Diana Hamilton Foundation to be screened.

The audience then queued up to purchase the first copies of the album Diana mounted the stage for her second set, belting out hit after hit. Fans were not disappointed as the night was ended with another Diana Hamilton favourite, ‘Work in Progress’.

VIP ticket holders were then ushered to the ‘VIP Lounge’ for refreshments and a meet-and-Greet session with Diana who personally thanked and had a photo session with them.

Diana’s current album ‘iBelieve’ is available via her website www.dianahamiton.com and all digital download stores including iTunes, Amazon, CD Baby and Deezer. You can also stream via Spotify. 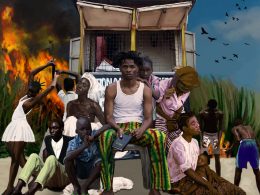 Jiggy Waz out with ‘Sexy Mama’