Sensational singer, Gyakie has promised that her next EP will go global & has since been seen linking up with Nigeria’s Falz.

Apparently, the duo crossed paths during a recent concert and they shared some positive vibes before they processed to thrill their respective fans with crazy dance moves in a concert that was probably staged during the yuletide.

Furthermore, the ‘Forever’ hitmaker as part of her new year resolution announced the release of her first Extended Play, EP.

Following her previous post, she further took to her Twitter page and added that she believes her EP will break boundaries and take over the world.

Efya’s Latest “Whoman Woman” Is a Celebration of Womanhood

When was the last time you heard award winning songstress, Efya sing in a tone that’s so…
byTeam aftown
Read More

President of the Creative Arts Council, Mark Okraku Mantey has lauded organisers of music reality shows in the…
byCurated
1 share
1
0
0 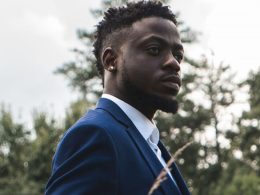 HERE IS THE MAN BEHIND THE AMENO TUNE