Mavins Record has postponed the release date for their upcoming single in respect to Davido’s son’s passing.

The record company was set to release the first single titled “won da mo”, off their upcoming album, however, the group decided to push it further back following the passing of Ifeanyi Adeleke, Davido and Chioma’s 3-year old son.

“Mavin All Stars’ Won Da Mo release date has now been moved to Wednesday 9th, November. The road still leads to the dynasty!!!” the post read.

Wizkid also took to his social media to announce the postponement of the release of his upcoming album, “More Love, Less Ego”, for the same reason as Mavin’s Records.

Celebrities from all over the continent and beyond continue to come through with condolences and words of encouragements for the parents, for their unexpected painful lose.

The music industry has no love- Obligation

Aftown music has been running operations in Ghana for over a year now. With an impressive number of…
byAntoine Mensah
7 shares
7
0
0
One comment 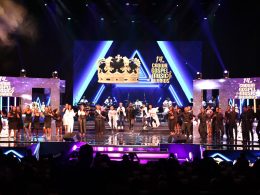 On Friday, 12 November 2021, The 14th Annual Crown Gospel Awards recording lived up to the anticipation as…
byCurated
No comments
Read More
1 minute read