Ras Kuuku unveils album cover for #Kuntunkununku ‘aka’ The Heaviest

byCurated
1 minute read
No comments
Total
1
Shares
1
0
0
0
0
0
Ras Kuuku has released the official artwork for his upcoming Album titles “Kuntunkununku”.
He made the announcement of his next album release a month ago, which he says is a strictly Reggae album with at least 15 songs listed.
“Kuntunkununku” he explains means “The Heaviest”, thus, would be recorded as his best album ever produced.
Samini has been mentioned as one of the major artistes featured on the album with several other features from Jamaica too.
Be on the look out for the much anticipated album by the ‘Puom Music’ CEO this September when it officially gets launched.
CaskeysOnit, Shottoh Blinqx, IbeeOndaBeat, Pken and Awaga, have been mentioned as some producers who worked on the upcoming album.
Brief on Ras Kuuku
Ras Kuuku is a household name within the Ghanaian Music Industry with multiple nominations in Vodafone GHANA Music Awards and has won multiple awards under BASS Awards. He has shared stages with international acts Popcaan, Jah Vinci, Kranium, Alkaline, just to name a few.
Ras Kuuku has won for himself a lot of following with his fans called “Puom”, a monicker he has launched himself with when he registered his first monster hit “Father”, followed by successive major cuts “Show Them Love”, “Ye Taali Mu” (ft. Shatta Wale), “Nwansina”, “Wo”, just to list a few.

TEFLON FLEXX, ONE of the greatest artistes from the Northern part of Ghana, born Akaateba Christopher who recently…
byCurated
1 share
1
0
0
No comments
Read More
2 minute read

With all featured guests exhibiting their lyrical prowess, “Wole Remix” is what hip hop fans have been waiting…
byTeam aftown
1 share
1
0
0
No comments 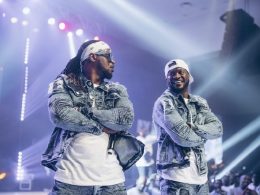 Nigerian music brothers, P-Square, have released a teaser for their upcoming single, ‘Jaiye’, which is to be released…
byTeam aftown
No comments
Read More
1 minute read

"My everything" is an appraisal melody that  basically seeks  to thank God for all  he's done, as well as denoting God is indeed his everything.
byTeam aftown
10 shares
10
0
0
No comments